This month, John Hopes turns his analytical powers onto the strengths and weaknesses of OR and the society itself; Hannah Muitt writes up of the Voices of the Future event held at the Houses of Parliament; and society president Ruth Kaufman discusses her plans for the future.

Last But Not Least

Five years after my first lead article for Inside OR, I sadly come to my last (well, it is sad for me but perhaps not the readers). Looking back I see that many of my previous articles dealt with opportunities, and to a lesser extent threats, to OR largely arising from the digital economy, analytics and data science. This time instead I will focus on some of the strengths and weaknesses, both of OR itself and The OR Society.

One of the most persistent weaknesses of OR is that, if you pluck someone at random from the street, it quickly becomes apparent that they know as much about OR as they do about the work of the Loriners, Cordwainers or Pattenmakers. In fact, it is difficult to think of another academic discipline or profession that is as little understood by the average person, although that should change in future thanks to the society’s OR in Schools initiative led by Charlene and by Louise before her. In the meantime, Rob Chidley is a man who likes a challenge, and I know he has plans to address this lack of profile.

Given its obscurity one of the more surprising strengths of OR is the current booming level of demand for OR skills. This is because, in a world of big data and analytics, the combination of
mathematics, IT skills and commercial acumen that comes with an OR background is precisely what is needed. It is just that this demand is in jobs that are unlikely to be labelled OR. For example, a recent analysis of the job titles of the ORS LinkedIn group reveals very few featuring OR, with data scientist or various forms of analytics professional being the most common titles.

Along with the boom in demand, however, comes another consequent OR weakness which has been covered before on these pages by me and others, and that is the relative shortage of newly qualified OR graduates and post graduates coming onto the market. This is acutely felt in the practitioner world, but it is also, I am told, impacting academic research. And this brings me to a topic that I am not sure is strength or weakness as it is outside my area of expertise, so let’s just call it a concern, and that is innovation. During my time in the profession there has been a steady stream of OR innovations, including various soft OR methods, DEA, agent based modelling, visual interactive simulation, stochastic programming and all sorts of heuristic approaches. But all of these were 20th Century developments. Now it may be that it takes 20 years before O.R. innovations make their way to the practitioner community and that there is plenty on its way. But given the rate of current innovation in IT and AI (e.g. Google’s driverless cars or machine-based Go champion), it would be good to see OR also taking a place at the heart of research initiatives such as the Alan Turing Institute.

Returning to definite strengths, though, for me the greatest of these for OR is, as it always has been, that it provides practical high value solutions to problems that cannot be solved by other means. Lapsing into opportunity mode for a moment, if we can give a compelling demonstration of how OR adds value to analytics – to bring the scientific rigour into data science, as it were – then I believe we can create a whole new wave of demand for OR.

Turning now to The OR Society, perhaps our most obvious weakness is our membership. But before you take offence, I mean quantity rather than quality; we have wonderful members, just not enough of them. Our membership of almost 3,000 compares with 5,000 for the Institute of Mathematics and its Applications, 6,000 for the Royal Statistical Society and a massive 75,000 for the British Computer Society. This does place some limits on how much we can do, but fortunately that weakness is mitigated to a large extent by one of our biggest strengths, which is our journal income. Richard Eglese and the Publications Committee are some of the most important people in the ORS, and long may they enable us to punch above our weight.

A feature of the society that manages to be both strength and weakness at the same time is our annual conference. It stands out other such conferences in having a good balance between practitioners and academics among its attendees; and yet the practitioners often complain that it is too academic whereas the academics feel it is too much geared to the needs of the practitioners. Unless we can persuade both communities that it meets their needs of a conference, and that they are indeed really part of a single community, we might need to give in and adopt the INFORMS approach of having separate conferences for practitioners and academics. It would, however, be a great shame to lose the distinctiveness of bringing all in OR together at a single event. To my mind the greatest strength of the society is its people. Gavin and the team in the office do a fantastic job in delivering the society’s services and initiatives. But this is also backed up by an army of enthusiastic volunteers who populate our committees, edit our journals, run our events, our special interest groups and regional societies, and contribute to Inside OR.

It has been a great privilege for me to work alongside 20 very experienced and talented colleagues who have been on the Board over the last five years, and I can assure all members that such a group ensures that every decision of the society has been thought through very deeply before being made. Being actively involved with the society during my time on the board has  been both extremely rewarding as well as a lot of fun and I would urge all members to consider joining the volunteers I mentioned above. I am sure you will gain a lot from it, for, as I said in my first lead article, it is the sense of community that is provided by the society that should be most highly valued by its members.

In conclusion, I believe very strongly that the strengths of OR and The OR Society outweigh the weaknesses, and, in any case, Ruth’s strategic priorities aim to address the weaknesses I have identified here among others. There is, however, much that can also be achieved by building on the strengths, and If we get this right we could be at the start of a golden period for OR. It has been a great five years being on The OR Society Board. I will still be haunting the committee rooms for a few more months yet, but this is my sign-off from this slot. It has been a pleasure writing for you and I wish you all well for the future. 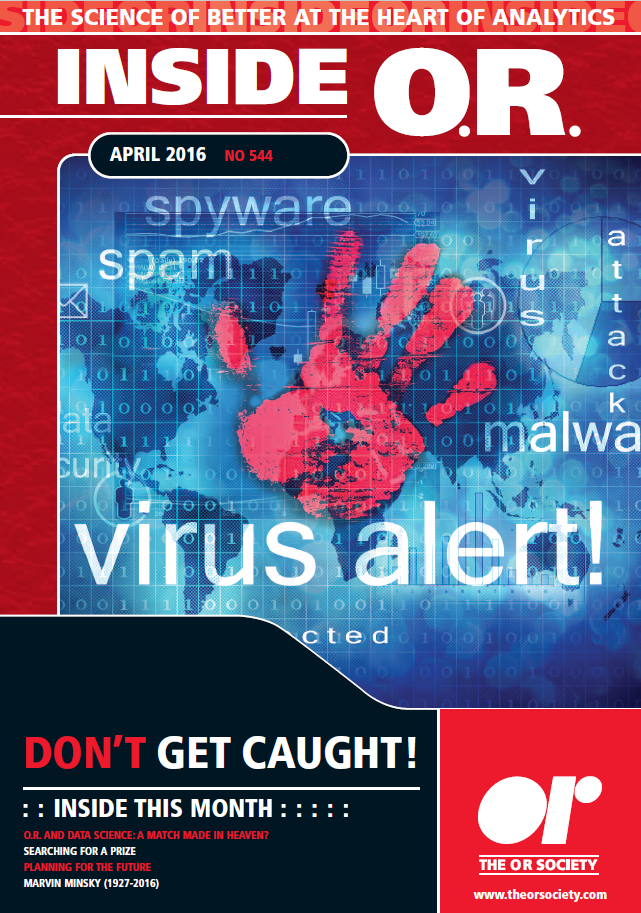