This month, the ramifications of Brexit are still being made clear and Louse Maynard-Atem’s article is therefore required reading; Christoph Werner describes his experience of the European Conference for Operational Research and Management Science (EURO) which took place in Poznan recently; and Sanja Petrovic introduces the two speakers at our upcoming Debate on Operational Research, to be held at our annual conference.

RUTH KAUFMAN FORS, PRESIDENT OF THE OR SOCIETY

‘We are far more united and have far more in common with each other than things that divide us’ (Jo Cox MP, maiden speech to parliament, 3 June 2015)

The OR Society vision of a world improved by rigorous analysis and better, evidence-based, decision-making is something that I imagine unites most operational researchers. But for UK OR people, the vision has been sorely challenged recently. I am writing this leader two weeks after the Remain/Leave referendum, and three days after the publication of the Chilcot report; both of which offer plenty of food for thought for anybody who believes that decisions should be based on evidence and analysis.

Let us start with the referendum. If you voted (and many OR Society members will not have voted – either because you are one of our  overseas members, or because you are one of the 28% of the UK electorate who did not vote) the chances are higher that you voted to remain than to leave. Analysis of the vote showed that a majority of working people voted to remain (a high proportion of members are in full-time or part-time work); 57% of graduates, and 64% of those with a higher degree, voted Remain (almost all members have a degree); 57% of socio-economic classes AB (by definition, most of our members) voted Remain; and 90% of university staff voted remain (half our members are academics). But many of you may well have voted Leave; there are good arguments on both sides, and the OR Society did not and does not take a position on the issue.

So the actual referendum outcome may not unite us. But it is a different matter when it comes to the decision process. OR people know what it takes to make a good decision. Ingredients may vary, but definitely include: identifying the key stakeholders together with their roles, values, preferences and objectives; bringing together as much data as possible in the time available; specifying the options, and analysing the costs, benefits, implementation requirements and consequences of each option; identifying uncertainty and risk, and managing accordingly; and finally weighing up all the factors – you could no doubt add to this list.

The framework for the EU referendum lacked most of these ingredients. The campaign itself, on both sides, was characterised by a level of disrespect for evidence, analysis, uncertainty and risk, distressing to any scientist. Equally problematic was the fact that people were being asked to say whether they chose or rejected the Britain-outside-Europe option in the absence of any agreed specification of such an option. A uniquely dysfunctional feature of this particular referendum was that the people leading the ‘Leave’ campaign would not have the power and authority to implement the decision even if they won (and this has only got worse as events have unfolded). And amazingly, it appears that there is even uncertainty about who may implement a Leave decision by triggering Article 50 of the Lisbon treaty (the formal mechanism for applying to leave the EU).

The UK declaration of war on Iraq in 2003 followed quite a different decision process, but one that has now been forensically examined and exposed as equally flawed. As good OR people, we know that this matters. Obviously, it matters that the wrong – the more costly, more damaging – decision may have been reached in each case; that is why we spend our professional lives trying to reach better decisions, by observing the fundamentals of good decision-making. But also, those of us who are involved in consulting know that the decision process itself
changes the world. In a good consulting engagement, the process adds to participants’ insight, engagement, and judgement – sometimes more than the actual recommendation. A bad process may also change the world: for example, hate crime reporting increased five-fold after the referendum with many attributing this to some aspects of the campaign (including no less a personage than the Archbishop of Canterbury). So, what can we do?

The OR Society is small, but there are some things within our power. I can confidently say that there will be no BORexit from EURO; and that we will not seek a rebate on our 100€ membership fee. On the day the Chilcot report was published, I was on my way back from the EURO2016 conference in Poznań, where participants from 80 countries came together to share, learn and build relationships. Before the conference started, I went to my first ever EURO Council meeting, where Presidents and EURO representatives from EURO’s 31 member societies reviewed the huge range of activities sponsored by EURO, that strengthen and deepen OR research and practice for all of us. Both the council meeting and the conference
left no doubt that the UK involvement in EURO is important to the UK, to EURO, and to the profession. This was reflected in the memorial session for Rolfe Tomlinson and Maurice Shutler, two giants of UK OR who were also influential presidents of EURO; in the welcome given to Richard Eglese of Lancaster University who is President Elect of EURO and to Sally Brailsford of Southampton who has just stepped down as Vice-President; in the enthusiasm with which EURO has adopted the ‘Making an Impact’ initiatives for practitioners; and in the scale of the UK contribution as a whole to both the conference and wider EURO activities.

I can also confidently say that The OR Society will continue to welcome members from all sections of the community, whatever their ethnic origin, nationality or immigration status.
And I am confident that our members will continue, individually, to use their OR expertise to offer sound advice on how to make decisions when the issues are complex, the evidence flawed or incomplete, or the uncertainty immense.

Should we go further? Should we, perhaps, speak out as a society where we see good decision-making practice being flouted, in the same way that the UK Statistics Authority Chair corrected the interpretation of the ‘£350 million per week’ figure? Or establish a ‘Decisioncheck’ along the lines of Full Fact’s Factchecks, to audit decision processes? Or work with other relevant organisations to establish a ‘Council for Decision Sciences’, along the lines of the ‘Council for Mathematical Sciences’, to improve the quality of public decision-making? These steps would take us beyond our traditional remit, and their cost would probably require a step-change in the current membership fee; but would the return, in terms of spreading understanding and awareness of OR and its benefits, justify that?

The Analytics Network were invited to visit Cranfield University by Daniel Sandars earlier this year during which they heard about the work being done by various departments to make sense of big data. 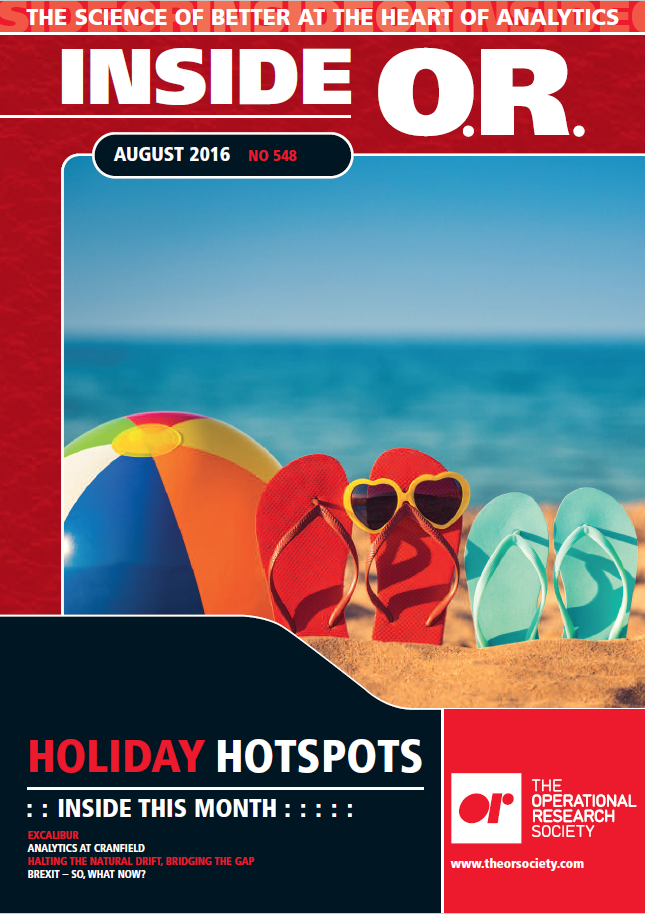