This month, OR Society president Ruth Kaufman gives an inspiring defence of the tremendous value of OR; Nigel Cummings presents a fascinating overview of how scientists, including mathematicians, operational researchers and strategists, are part of the effort to analyse the terrorist organisation known as ISIS and to develop effective strategies to counter it; and Louise Maynard-Atem looks at how the widespread flooding over Christmas reveals there are still great improvements to be made to flood defences in the UK, and that operational research has a vital role to play.

Problems! Don't Talk To Me About Problems

I don’t quite know what our children were trying to tell us when they gave us the book How Not To Be Wrong for Christmas; though the subtitle The Hidden Maths of Everyday Life took some of the sting out of it. I started reading it on Boxing Day, and was bowled over.

The bit that got me hooked was a spirited defence of the usefulness of maths even for people who will never use the specific mathematical operations that they spent hours on in school. The author, Jordan Ellenberg, draws an analogy with the repetitive physical exercises – weight curls and the like – used by professional sportsmen to build strength, insight and other skills even though they’re never directly used on the field of play; and also used by amateurs who simply want to improve their fitness or skill.

This struck a chord because it is equally true of operational research. Of course it would be – what is OR but maths or science insights applied to problems of social or business organisation? OR people cover the whole spectrum, from deep experts in something generally recognised as ‘an OR technique’ who spend most of their time developing or applying that technique, to people who have never read a single OR textbook. In between are many who, once upon a time, read and wrote reams about travelling salesmen waiting in M/M/1 queues for convex objective functions, but who have never actually met them in real life. Is OR knowledge really useful for all of them?

These days, the deep experts have to demonstrate their usefulness and there is a huge array of evidence of their value. Rosetta landed Philae on comet 67P/Churyumov-Gerasimenko; river environments have been redesigned to restore fish populations; more flights use Heathrow Airport; Oxfam collection bins overflow less often; ministers’ approach to child protection failures has been transformed; stroke patient mortality has been slashed. Just to take a handful of cases from recent reports, awards and talks. But let’s take a handful of other cases, all presented at EURO2015. Setting international standards for mass evacuation planning; saving more lives at sea; testing the likely impact of government policy before it is introduced; stepping in when the system for producing UK population projections crashed. An equally important set of outcomes, produced by OR people, but requiring no techniques beyond interviewing, statistics, spreadsheet and thinking. The question here is not ‘is what we are doing useful’ but ‘does the useful stuff we are doing require knowledge of OR techniques to be useful’. The old perpetual anxiety of the generalist – is it really OR?

I have argued previously that as long as you are using mathematical or scientific approaches to address organisational problems, yes, it is OR. But that’s not the whole story. There’s an old joke about two people walking in the jungle, who spot a tiger. One starts to run. The other says: ‘Why? you can’t outrun the tiger’, and the first says: ‘I don’t have to – I only have to outrun you.’ If all you need to do is add value through mathematical or scientific approaches, you don’t have to get the best outcome possible, you just have to do better than people who do not have a mathematical or scientific cast of mind. But how many of us want to go through life as somebody who did no more than outrun their colleague? Most of us are keen to do more, measuring ourselves not just against our peers but also against our ideals, always searching for a better solution, a more effective outcome, indeed the best that can be done within the constraints. When it comes to our professional practice, most of us act as optimisers, however ‘soft’ our methodologies. That invisible optimum – the perfect combination of skills and knowledge for all the problems we are tackling – may be beyond our reach, but a broad knowledge of the ‘OR canon’, and experience of using O.R. models, will bring us closer. How? Such knowledge and experience inculcates insight into ‘problem archetypes’ such as process problems, dynamic system problems, resource allocation problems, scheduling, transportation, uncertainty. And it reinforces ‘the OR process’: all the skills and craft of iterating between the real world and a model of the world until you have found a useful outcome.

So: what’s my message? First, that advanced OR techniques are being used in exciting and influential ways. Second, that you don’t need to be actually using advanced techniques – or indeed anything in the textbooks – to be doing exciting and influential OR. Third, that there is a distinctive ‘OR approach’ that is exemplified by applying ‘OR methods’ (though not exclusively – plenty of other disciplines provide an equally good basis). And finally, that the more you are aware of the variety of problems that OR people have addressed and are addressing, the more insight you will have into the variety of problems you yourself must tackle, and the more ideas for how to tackle them.

It was Ellenberg’s sporting analogy that set me on this path, but his book is littered with ideas which can be lifted straight into the world of OR, as well as mathematical insights which are crucial to OR practice. Alas, as Ellenberg says: ‘Wrongness …remains always with us, and constant vigilance is necessary if we mean to restrict its sphere of influence over our actions.’ Whether my children will ever find me sufficiently vigilant is a question for another forum. 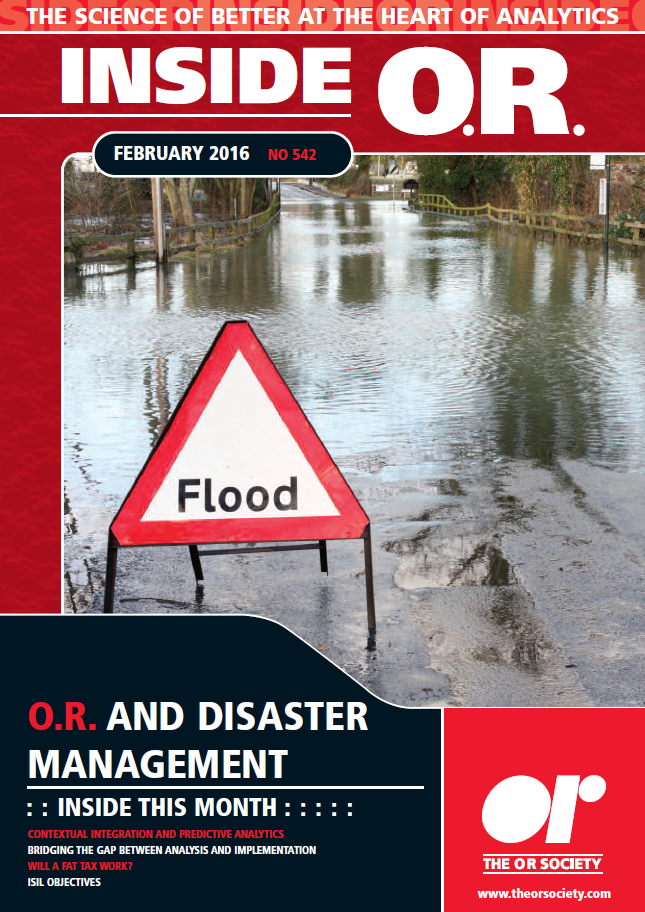 OR and Disaster Management; Contextual Integration and Predictive Analytics; Bridging the Gap Between Analysis and Implementation; Will a Fat Tax Work?; ISIL Objectives.