The Association of European Operational Research Societies, better known as EURO, (not to be confused with the currency!) has 31 members, UK is one among them.

It was founded in 1975, and similarly to our society it is a non-profit organisation which ‘aims at the advancement of knowledge, interest and education in operational research by the exchange of information, the holding of meetings and conferences, the publication of books, papers, and journals, the awarding of prizes, and the promotion of early stage talents’. EURO organizes a number of different conferences and events each year. They refer to them as ‘EURO instruments’. Information about each instrument can be read at the EURO Web page www.euro-online.org/web/pages/1/home. I was interested to find out to what extent UK OR researchers have been involved in the EURO instruments.

EURO Conferences
EURO conferences have become ‘massive’ in the sense that they attract a huge number of participants. Generally, around 2500-3000 participants is considered to be more or less a norm now. The UK is represented rather well, both with respect to the number of participants and general contributions to the success of gatherings. At EURO 26 there were 245 UK participants out of 3592 registered, 151 out of 2119 at EURO 25 and 170 out of 2541 at EURO 24). In the period 2001-2015, UK hosted EURO 2015 in Glasgow and IFORS 2002 in Edinburgh. Both were very successful.

EURO Mini conferences
These conferences, of which there can be two a year, are special smaller gatherings in the sense that they are focused on specific OR topics. EURO offers support to a number of participants but does not cover any losses or take a share of any profit. In the period 2005-2015, in total 16 EURO Mini conferences were organised; only one in the UK, in Nottingham.

EURO Working Groups (EWG)
There are 32 EWGs in total. They organise their own conferences. Roughly 15 UK researchers serve as co-ordinators or are members of EWG Boards.

EURO Summer/Winter Institutes (ESWIs)
ESWIs were launched in 1984, with the aim to encourage new generations. Each ESWI focuses upon a particular OR topic. An ESWI lasts for about two weeks, and gathers around 25 early stage researchers, where ‘early stage’ refers to either PhD students or researchers who have less than two years research experience since completing their PhD. Interesting thing is that they are expected not to have published papers on the ESWI topic. A number of senior experts in the field are invited to participate in the work of the institute. ESWIs are organised in the following way: early stage researchers present their research ideas in front of all the participants, a lot of time is dedicated to discussion and the aim is that they prepare a paper for submission to a selected OR journal. ESWIs offer a unique opportunity to early stage researchers to create and be part of the network of the ESWI’s chosen topic. EURO regularly invites proposals for ESWIs from the national societies, and provides a substantial support towards all ESWIs expenses on the location (such as rooms, social programme, etc.). Commonly, two ESWIs may be approved per year. Since their birth in 1984, UK has hosted four ESWIs, in Canterbury, Salford, Warwick and Southampton.

EURO PhD Schools
EURO PhD Schools are an instrument which has been established recently, in 2012, to encourage the organization of post-graduate education for PhD students. There is still not much information about them.

This instrument differs from the other EURO instruments for being training-oriented with a school format, and by targeting PhD students. UK OR Society does participate in all EURO instruments, and occasionally hosts some events, but I believe being a birthplace of OR, UK could take a more active role. Organising more specialised events will not affect the attendance at our main annual OR conference. A good example is Germany/Austria/Switzerland which attract a large number of participants at their ‘domestic’ OR conferences but also host a large number of EURO events. Particularly, I think we could and should be more engaged with EURO Summer/Winter Institutes. Furthermore, EURO PhD school is really a promising instrument which has been recently approved, and we could take an active role here.

The aim of this article is to give a short introduction to EURO instruments. Prof Richard Eglese, from Lancaster University, who serves as the President Elect at EURO, will have a talk about these instruments at our OR58 conference in Portsmouth, September 6-8, 2016. Look forward to seeing you there! 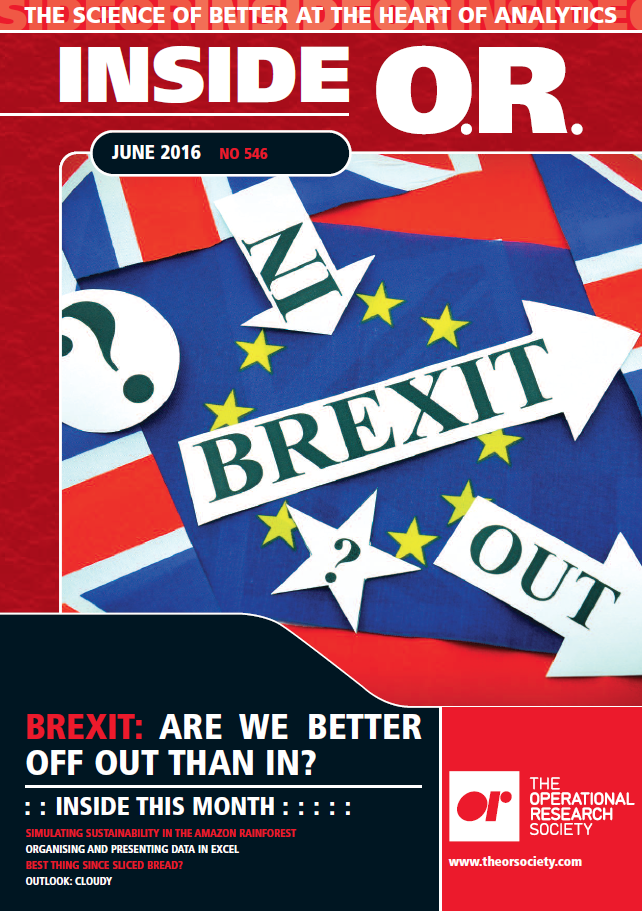 Brexit: Are We Better Off Out Than In?; Simulating Sustainability In The Amazon Rainforest; Organising And Presenting Data In Excel; Best Thing Since Sliced Bread?; Outlook: Cloudy.