This edition looks at the incredible variety of areas to which the term ‘analytics’ is now routinely applied; Louise Maynard-Atem reflects on the ‘Panama Papers’ data leak and explores the relationship between OR and taxation; and Janet Williams steps into this important role of OR Society Treasurer.

JANET E WILLIAMS, TREASURER OF THE OR SOCIETY

This is my first lead article for Inside OR as your new Treasurer and I would like to start by thanking the previous Treasurer, Roger Forder. He has been a tremendous help in explaining and passing over all the paperwork (or files these days) and briefing me on my responsibilities – thank you Roger and also Gavin, our General Manager, for all your help.

Now perhaps you would like to know a little bit about me, although I am new to this role I am not new to The OR Society. Recently retired, I was a senior lecturer in Operational Research at Cardiff University where for many years I was privileged to be the lecturer who would first introduce our second year students to OR; I loved to start the module by showing the society’s video on ‘All about OR and Careers’, especially as it contained clips of some of our previous students and I could make comments like ‘n-years ago he/she was sitting in this lecture theatre’.

At this stage in their lives many students are still uncertain about their future career and this video is certainly an eye-opener. My administrative role was mainly involved in organising one-year placement opportunities. This gave me the opportunity to work closely with students and practitioners, it was nice to observe the change in the students throughout their year in industry and see how much of an impact this year had on their future careers. During this time I also held various roles within The OR Society: member of general council; website committee, accreditation committee; organising committee for an annual conference and also proud to have co-chaired the annual conference in Edinburgh with Sue Merchant. This gave me the opportunity to meet (network) with so many people and I would like to highly recommend and encourage everyone to get involved with the society. The easiest way to do this is via your regional society or contact the office.

So the reason that I am writing this leader is that the society’s year corresponds to the calendar year and our 2015 accounts have now been finalized, subject to audit, thus the May issue of Inside OR provides a good opportunity for me to bring members up to date on the society’s finances. It is pleasing to report that the Society’s overall income and expenditure account, excluding changes in the value of investments due to stock market movements, showed a surplus of nearly £117k during the year, on a turnover of nearly £1.9m. This compares with a surplus of £82k in 2014. The favourable 2015 outturn was significantly ahead of budget as a result of increased income or reduced expenditure in a number of areas. The most notable of these was training, where, for the first time in several years, a surplus (nearly £15k) was recorded; training income was up by a factor of nearly three compared with 2014. An outstanding performance in 2015 by Jennie Phelps and the training team.

As most members know, the society derives a very high proportion of its income from its academic journals, which in 2015 contributed £627k net of all associated costs. Any significant diminution in this income stream could indeed make for interesting times. For some years, therefore, the board has been concerned about the possible impact of the move by governments, both in the UK and elsewhere, to mandate ‘open access’ publication of the output from publicly funded research. Therefore we are by no means complacent and thus the board has set the minimum level of reserves at one year’s gross income arising from the society’s research journals plus 50% of annual general fund income from other sources. The maximum level is set at the minimum level plus a further 50% of annual gross research journal income. This approach reflects the critical dependence of the society on its journal income.

On a positive note the planned merger between our journal publishers, Palgrave Macmillan, and the Springer publishing group as part of a joint venture by the owners of the two companies has taken place and our journals should benefit from this. Currently the proposal of a new Analytics Journal is making progress and we are confident of sustaining our academic journal income in the short term at least.

Management of a £1m+ investment fund is not something to be taken lightly and the society employs Investec, the well-known investment banking group, to undertake this for us, working to a fairly detailed mandate agreed by the board. Investec’s actions and proposals are reviewed by the Society’s Investment Committee, chaired by the Treasurer, which meets twice a year. Thus the society’s investments and their performance are kept under review by the Investment Committee in accordance with policies decided by the board who this year has decided on a Medium Risk Portfolio.

The society relies primarily on income from its academic journals and subscriptions to support most operations of the charitable aims of the society – such as conferences, special events, regional societies, special interest groups, education, publicity and outreach initiatives, the monthly Inside OR magazine, the website and special charitable projects including the Pro-Bono OR projects.

Felicity McLeister who co-ordinates the Pro-Bono projects, has been successful in increasing the number of projects this year, which have been enthusiastically received by clients. Ways of converting the large number of people involved with these projects to become society members are being considered as the only minor down side to the accounts is the small decrease in the income from subscriptions.

To summarise, the society's finances are in good order at present, due to careful management by the board and investment committee. What we must remember is that the society is a
charitable company and that we are not here to make money but as stated in Ruth Kaufman’s (our President) strategic priorities what we are about is ‘to enhance the reach of The OR Society, visibility of OR, engagement of OR people with The OR Society and each other the ‘people pipeline’, and the strength of UK OR research’. Quite a challenge so if you have any ideas to help us achieve any of these goals which might require funding then do contact us at the society. 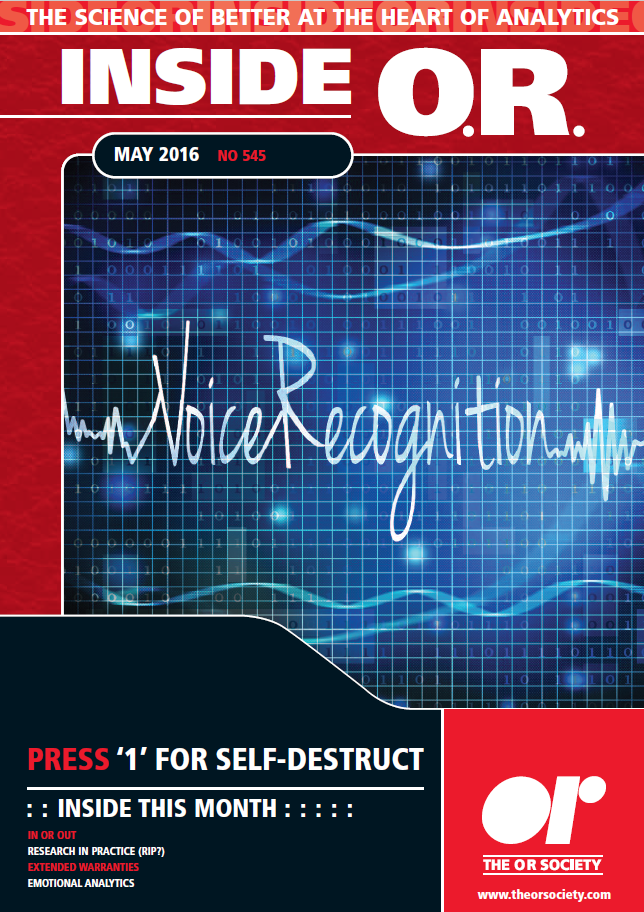 Press '1' For Self-Destruct; In or Out; Research In Practice (RIP?); Extended Warranties; Emotional Analytics.