In this edition of Inside OR, we have features giving us insights into some of the people who serve and represent our members on the society’s general council; a book review on forecasting; news of an exciting animation telling the story of OR in the world wars; and a host of stimulating articles on different aspects of OR and analytics.

Leadership At All Levels

When this particular edition of Inside OR is published, the American electorate will still not have gone to the polls to elect their next president. They will still be on the threshold of history, possibly preparing to elect the first female candidate to their highest position of leadership.

When this particular edition of Inside OR is published, the American electorate will still not have gone to the polls to elect their next president. They will still be on the threshold of history, possibly preparing to elect the first female candidate to their highest position of leadership. What many US voters may not realise is that either candidate will make history upon election. This is because both candidates are the least popular to ever stand in the history of US politics. Both Clinton and Trump have historically high ‘unfavourables’ (meaning record numbers of voters rate both as “strongly unfavourable”) and historically low ‘favourables’ (meaning very few voters like them at all). The polls certainly do make grim reading, explaining why “hold your nose and vote” has been a phrase oft-repeated in the American press this year.

However, neither candidate appeared out of thin air. Both came through a process of nomination, campaigning and election within their parties – a process which should be characterised by the robust exchange of ideas and the examination of character and policy. At times, it seemed like the selected candidates were able to win their nominations through political manoeuvre and the obfuscation of scandals rather than on merit, but win they did and now the American people must choose.

As you know, The OR Society recently went through its own nominations processes – for arguably not the most powerful offices in the land (despite what past presidents have thought) but for a number of leadership positions that will help guide the society in the months and years to come. You can read the formal announcement elsewhere in this issue, but the headline ‘news’ is that the society has found its next president (2018-2019) and I am delighted to announce that John Hopes has been elected to the board and general council as president-elect. He will serve one year in this role from 1 January 2017, followed by two years as president (2018-2019) and wind down during 2020 as immediate past president. I’m sure John will be continuing to contribute the experience, expertise and enthusiasm he’s shown in both his leadership roles with EY and the society. Ruth will certainly be a tough act to follow.

There was one other key leadership position which wasn’t settled as part of the recent nomination process, that of vice president, who will provide valuable advice and another layer of senior leadership in support of the society’s president. I’m delighted that we’ll actually need to move forward to a different part of the process as three successful nominations mean we need an election. Members will receive a formal invitation to vote along with information about each of the candidates in the next couple of weeks. An election might seem an unwelcome administrative burden but it does give us an excellent opportunity to highlight the workings of the Society. Please make your voice heard with a vote.

The society has numerous other opportunities for leadership at all levels in which you can support The OR Society and the OR community at large. The society’s general council is made up of a number of committees which oversee different aspects of the society’s activities: including Publications; Publicity, Membership and Website; Events; and Education and Research committees. If you could bring some energy and enthusiasm to the committees, please get in touch with me for further discussion.

If committees don’t fire you up, perhaps you could take one of the many volunteering opportunities the society creates – from donating expertise to good causes in our Pro Bono OR scheme to helping out with schools visits with OR in Schools. You could get involved in running events or conferences, or simply advocate for the profession by distributing additional copies of Impact Magazine to someone who might appreciate or even need our expertise? In short – the society is certainly steered by many oars, so if you’d like to ‘stick yours in’ please do get in touch. 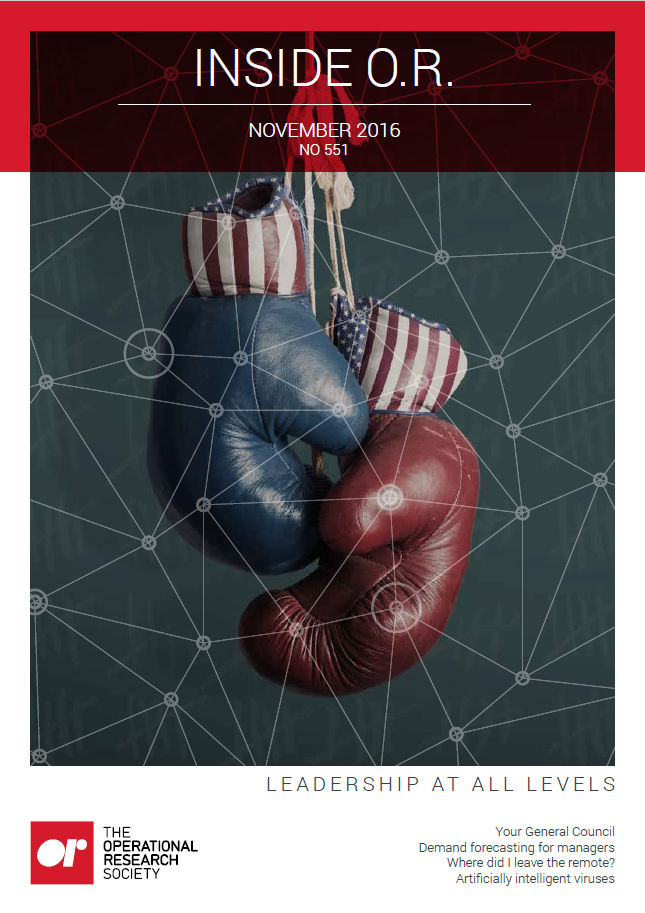 Leadership At All Levels; Your General Council; Demand forecasting for managers; Where did I leave the remote?; Artificially intelligent viruses.