This month features a Letter to the Editor, which came in response to our recent Brexit articles and expresses a vision for how our expertise in the science of decision-making can combat scepticism. Also within this edition you can find Frances O’Brien’s leader on ‘Team OR’ (inspired by the summer successes of Team GB and Paralympics GB); Ruth Kaufman, John Crocker and Louise Maynard-Atem all reflect on the recent OR58 annual conference; and John Ranyard and Robert Fildes continue their series on the state of OR today.

Over the summer and in recent days, Team GB and Paralympics GB have been wowing audiences with their stunning performances, which are both on course to outperform those of the previous two Olympics in London and Beijing.

This year, as at London 2012, I was struck by the strong sense of identity the Teams GB showed and the great celebrations that were held to mark their successes. Whilst watching events unfold, I reflected on Team OR GB, or should I say Team OR UK, our sense of identity and how we celebrate our successes. Over the years, we have often revisited the issue of the profession’s identity – do we keep or drop the OR name/label and more recently should we, as others have done, embrace analytics into our name and thus identity?

It is very easy to think about things that divide opinion; I wondered, if we turned this around, what is there to celebrate about OR in the UK and how do we do it? Throughout the society’s calendar, there are a number of events, large as well as small, national as well as regional and local, which as a body serve to illustrate what we Team OR UK get up to and which are worthy of celebration. Our annual conference is a major opportunity for us to both showcase and celebrate OR within the UK. This year’s conference, OR58, was hosted by Portsmouth University and the OR groups within the Maths faculty and Business School. This was an excellent showcase for our profession at its best for a number of reasons. First, we had over 360 delegates with an equal split between academics and practitioners – did you know that amongst OR societies globally, we are one of a very small number where the two typically mix? In other parts of the world, OR academics and practitioners seem to inhabit their own spaces and conferences.

The UK OR Society is quite unique in securing attendance and interaction between academics and practitioners at many of its events, including the annual conference. A particular feature of our conference is the MAI (Making an Impact) day which was originally designed to encourage practitioner attendance at the conference, but which in my experience has proved a fruitful opportunity for meeting both practitioners and also fellow academics.

Another point for celebration this year was that the society received seven entries to the President’s Medal competition which I believe is a record number of entries to this competition. Three finalists were chosen to showcase their OR work making a significant contribution to their organisation’s decision making, with the winning team from British Telecom demonstrating how OR can be embedded within the organisation to make a significant impact on its running.

When sitting down to a family meal, my mother always wanted to talk about what we were having for the next meal. And so it was with me as I sat basking in the sun at OR58. In fact, my thoughts drifted over the next two years in the run up to OR60, our diamond jubilee conference. As a committee, we have the next 12 months planned with a full programme.

Our next event for 2016 is the Blackett Memorial lecture in November with Professor Andrew Blake of the newly formed Turing Institute delivering his talk entitled: Machines that learn: Big Data or explanatory models? This event will be held in the prestigious Central hall at Westminster, London. This will be followed by the Annual Beale Lecture in March 2017 which will be held at the Royal Society in London. This event celebrates both established and new contributions to OR in the form of the Beale Medal, given in formal recognition of a sustained contribution to OR and the society’s annual PhD award.  As for our conference programme, we organise a number of conferences in the calendar next year, including the Y2OR and annual conference, both of which will be held at Loughborough university. Moving into our jubilee year, we have a rolling calendar of events which will include both SW18 and OR60, however the details, particularly of our jubilee conference are as yet a little sparse.

Special anniversaries warrant special celebrations. Over the next 12 months, the society will be exploring and discussing how we might celebrate our diamond jubilee conference. As ever, your comments and thoughts are welcome! 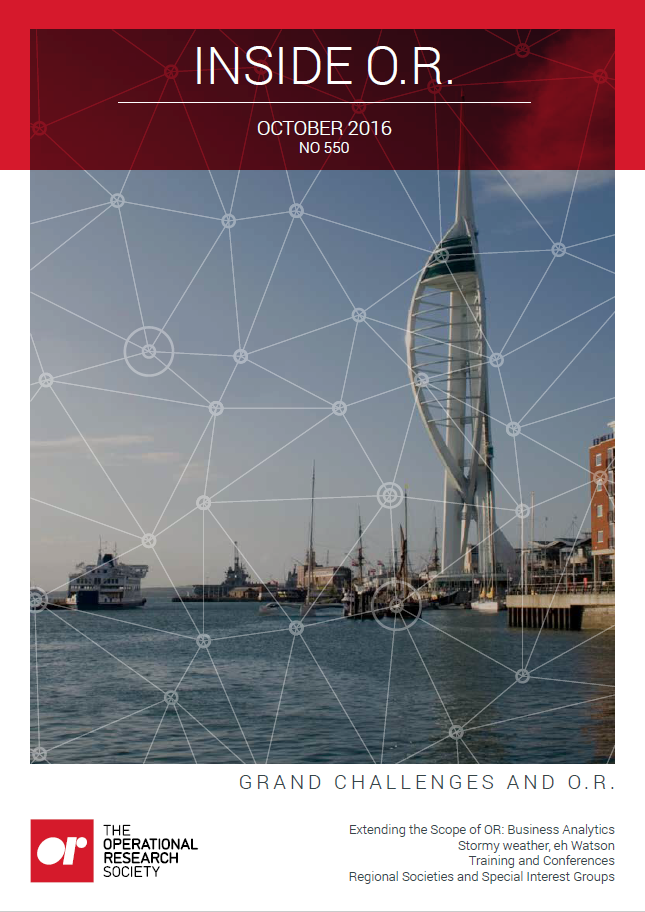