In this edition we look at the work being done to increase female recruitment to the OR Pipeline with the STEMettes; our journalist asks 'is the North East now the most interesting place in the UK for analysts?'; and we look back at talks from OR59, including 'The Joy of Being a Consultant' and 'Cornish Mining Heritage'.

Is it Time for an OR Museum?

We live in the era of modern technology that changes many activities in our everyday lives. Many things are available on mobile gadgets nowadays. We can read books on Kindles, we can socialise through mobile devices, and we can stream new films to watch them at home (with or without popcorn). But there are still some things that are irreplaceable and cannot be consumed on modern mobile devices.

I am thinking of museums, although they can and often do benefit from modern technology. While I was writing this article I, did some online research to find out more about exhibitions and discovered that there is an online exhibition or virtual exhibition whose venue is cyberspace, but let us not go this route. Let us keep this for a possible discussion in future issues of Inside OR. Although our first association of museums is usually art museums, scientific exhibitions are becoming very popular.

I have recently attended two scientific exhibitions which impressed me very much. The first one was an exhibition of Mihajlo Pupin in Belgrade. Pupin was a famous telecommunication scientists from Serbia (1858-1935), who worked in the US as a professor at Columbia University, New York, and was one of the founders of NASA. The exhibition included standard exhibits such as large panels informing about the life and inventions of Pupin, static displays of his inventions, and an excellent guide who talked about the scientist’s life (good guides are also still irreplaceable). An attractive addition to the exhibition was augmented reality, a frequently used buzzword in the museum community. It can be defined as the “integration of digital information with live video or the user’s environment in real time” (taken from WhatIs.com). Basically, augmented reality takes an existing environment, say a picture, and blends new information into it.

The other exhibition which attracted my attention was on Leonardo Da Vinci’s inventions, held at the Science Museum in London. It presented models of his flying machines, diving equipment, weapons, etc. Historical models of Da Vinci’s inventions were accompanied with large-scale reproductions of his famous drawings and sketches, interactive games, multimedia installations and examples of modern bio-inspired robotics, aviation and materials technology.

There is a wide range of science centres in the UK with hands-on exhibits aiming to provide a science education and bring science closer to the public. According to some official estimates, they attract collectively over 20 million visitors a year. This motivated us to start thinking of an exhibition of OR. The aim of our planned exhibition is to make OR more visible to the wider public and to raise awareness about the presence and importance of OR in decision making. There has been no exhibition yet which would promote and popularise OR as a scientific discipline. Whom would we like to visit our OR exhibition? Students who can be attracted to OR as their future careers, people who will benefit from a scientific approach to decision-making, and people who actually use OR in their decision-making but are not aware of OR as a discipline. We also believe that people who have a background either in OR or related disciplines such as mathematics, statistics, management, informatics, economics, computer science, etc. would like to visit such an exhibition.

A large effort into promotion of science, technology, engineering and maths (STEM) subjects has been made in the UK in the last decade. The proposed exhibition would contribute towards the overall aim of the STEM promotion and hopefully result in an increase of the uptake of STEM subjects among young people.

We would incorporate traditional types of museum exhibits, such as boards with text and figures, which will show the history of OR’s fast development and video presentations of a wide variety of modern applications of OR. We would also like to offer some interactive exhibits such as software games with touch screen facilities and physical 3D models of real-world systems of smaller size that will engage visitors of all ages. Examples of exhibits that we are currently considering include: routing of vehicles to deliver goods to customers, allocation of resources at an airport, restaurant, hospital, warehouse or shop floor; optimal locations of facilities, such as hospitals, to best serve the community; benefits of applying queuing theory in controlling queues; the list goes on. In order to make the exhibition really attractive for every visitor, we would like to explore and use augmented reality to provide a more interactive experience.

We plan to develop exhibits in partnership with a non-profit company such as Science Projects, London, which has experience in designing and creating hands-on interactive exhibits for museums and specialises in creating travelling exhibits. This means that the exhibition can be shown in different museums, science centres and relevant events in the UK. The advantage of having a travelling exhibition is that it will enable us to have a larger audience than if we have to choose only one venue for the exhibition. 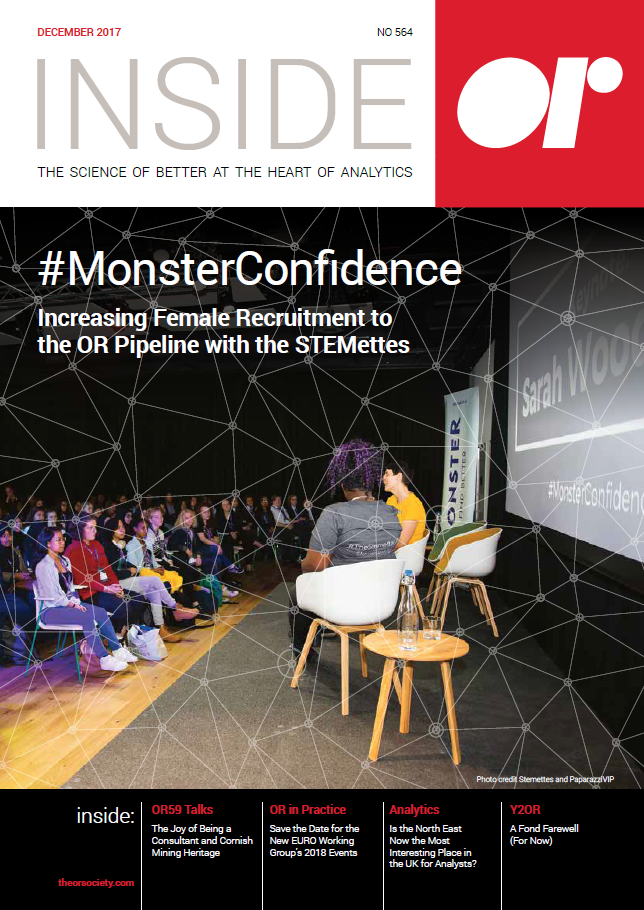 #MonsterConfidence; OR59 Talks; OR in Practice; Analytics; Y2OR A fond farewell.