In this edition, John Hopes considers the potential impacts of Brexit on OR; Hannah Kowszun and Kate Whiteside talk about the opportunities that arise from becoming a Chartered Scientist; and Lauren Petrie discusses life as a 'scientist turned operational researcher'.

So, where should I start?

ALAN ROBINSON, VICE PRESIDENT OF THE OR SOCIETY

So, where should I start? As this is my first leader article for Inside OR since taking up the role of Vice President in January – a role I’m extremely privileged to have the opportunity to fulfil – I thought it would be appropriate to introduce myself to readers who don’t know me well and to provide some initial reflections on my first few months as Vice President. I’ll also say a little about the things that I’m starting – or continuing – to get involved with.

My own background is in Defence and Security OR – or operational analysis (OA) as we tend to call it within Government – where I’ve been involved in a number of roles and areas ever since graduating in the late ‘70s! I’m currently a consulting fellow in the Defence Science and Technology Laboratory (Dstl) – a fellow in the Dstl sense typically being a senior technical member of staff without specific line-management responsibilities – where I primarily work in support of what we call High-Level Oa in particular related to evidence-based decision-making in support of Defence Policy, Procurement and Operations. I’m also actively involved in assurance-related matters, in modelling and simulation and in applied research – matters that I’ll aim to return to in greater detail in future leaders.

So, what have I been involved in since taking on the vice president role? Well, a number of things, ranging from my first meetings of board and general council, to my first committee meetings for the two sub-groups I’m involved in, to continuing involvement with OR Society related activities that I was already engaged in before becoming Vice President. First, however,
it is worth stressing the importance of a good handover and, wherever appropriate a degree of continuity to ease any transition – and I’m pleased (and very relieved!) to be able to say that I had both, in particular from John Hopes (as outgoing Vice President and in his role as President-elect), from Ruth (as President) and from key staff in the OR Society office (especially,
Louise Allison, who will have departed on maternity leave by the time this is published).

I attended my first board meeting in February and my first general council meeting in march. Both provided a great opportunity to meet key players – and in many cases to remake old acquaintances – and to put faces to names that I’d been communicating with over email in the run up to the meetings! A raft of papers also needed reading and digesting in order that I could participate fully in decision making. as a newbie I didn’t have to produce any of the input papers myself – phew! – so, that’s a pleasure to come for subsequent meetings. The papers and decisions related to a number of key issues, most of which have already featured in Inside OR or other OR Society messages, for example related to finances, overall strategy and the current Business Plan together with its associated actions.

I also sit on two committees or sub-groups; the Analytics Development Group (ADG), which I now chair having taken over the reins from John Hopes (a hard act to follow!), and the Education and Research Committee (ERC). I am also Board Champion for Capability – a cross-cutting role designed to ensure coherence across the society’s various groups and initiatives in this area. ADG is responsible inter alia for the analytics Summit – and I’m very pleased that we now have a full and very interesting line-up for this year’s event (on which there is more elsewhere in this issue) – for the introduction of the INFORMS Certified Analytics Professional (CAP) to the UK – which is moving forward towards implementation and hopefully we’ll have some news to announce shortly – and for making sure that our analytics Network is driving forwards our efforts related to analytics.

It is also worth briefly mentioning two other areas that I was involved in before becoming Vice President and continue to lead. First, I chair the Defence Special Interest Group (DSIG) and through that I’m heavily involved along with colleagues from our organising committee with developing and delivering the annual International Symposium on military Operational Research (ISmOR – www.ismor.com) to be hosted at Royal Holloway in July. I also co-chair the Heads of OR Forum (HORF). This brings together practitioner leads from across the Society and meets 3-4 times per year to provide a practitioner voice in support of O.R. and analytics leadership activities. We’re in the process of agreeing how best to grow HORF, including possibly changing
its name to more fully reflect the leadership community across both O.R. and analytics, so if you’d like to know more about HORF feel free to get in touch!

Hopefully it will be clear from the foregoing that there’s a lot going on – and, of necessity, I’ve only painted a broad picture here as space precludes a detailed account of all the associated activities. I’ve very much enjoyed getting up to speed with the vice president role and look forward to engaging widely across the society as we go forwards.
Alan Robinson [email protected] 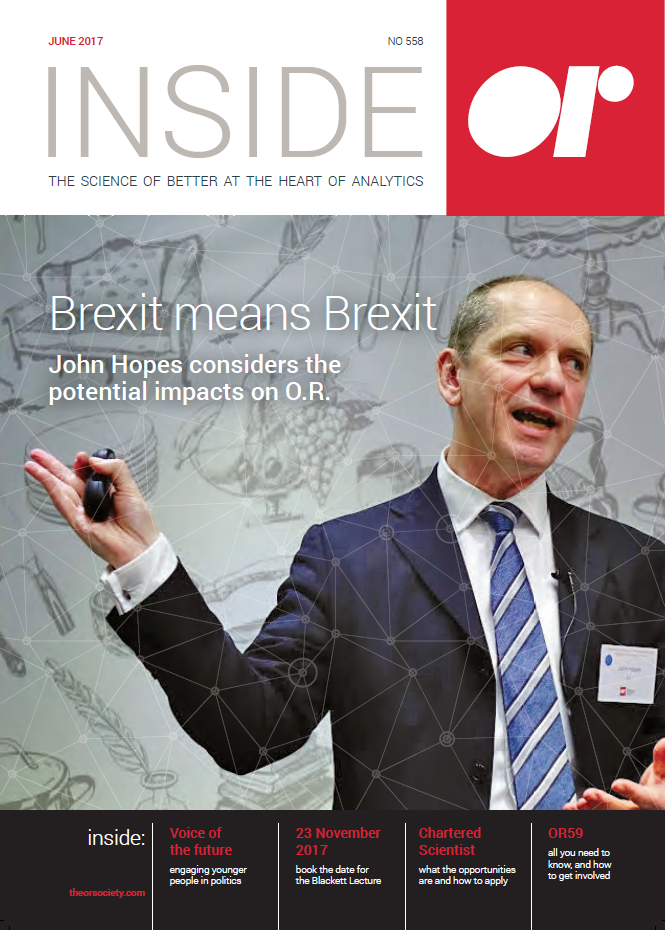