JANET E WILLIAMS, TREASURER OF THE OR SOCIETY

A year has flown by since my first article for Inside OR – and what a year it’s been!

The last 12 months will be remembered as one of the most interesting and unexpected of modern times; with the UK voting to leave the European Union, the triggering of Article 50, the US voting in a new, and clearly very different, president and a snap general election in the UK – what happens next is similarly unpredictable. So, as always, the reason I am writing in this May issue is because the society’s financial year corresponds to the calendar year and the audit of our 2016 accounts will soon be completed and ratified by the board. This provides a good opportunity for me to bring members up to date on the society’s finances. The finalised Annual Report and Accounts will be presented to the board this month and then be made available to our members before the society’s AGM on 22 June 2017.

To start with, our investment fund is still managed by an Asset Management Company, Investec, and the portfolio value at 30 December 2016 was £1.45m with an estimated annual income of £44k. They commented that 2016, from a stock market perspective, turned out much better than anticipated. As a result, the gains are greater than expected. Analysts are cautiously optimistic for 2017 – which they say will be determined as much by politics as economics – but Investec warned that markets could change quickly. Our Investment Committee decided to stay with a medium risk portfolio and Investec will adjust our portfolio accordingly.

The society’s income and expenditure account showed a surplus of nearly £84k during the year, on a turnover of nearly £1.3m. This compares with a surplus of £89k in 2015. The favourable 2016 outturn was significantly ahead of budget, as a result of increased income in a number of areas. The first of these was training where, for the second year in a row, a healthy surplus (£13k) was recorded; training activity continues at a high level, primarily due to the foundation courses arranged for the Government OR Service. Publications income outstripped its forecasts, partly as a result of unexpected back catalogue sales.

Just over 90% of the society’s net income is derived from its academic journals, which in 2016 contributed £705k net of all associated costs. This, together with our income from subscriptions and training, is used to support the charitable aims of the Society – such as conferences, special events, regional societies, special interest groups, education, publicity and outreach initiatives, the monthly Inside OR magazine and special charitable projects. Our dependency on journal income is our most significant material risk. As such, the society’s reserves fund is set at a minimum level of one year’s normal gross income arising from the society’s research journals, plus 50% of annual general fund income from other sources. The maximum level adds a further 50% of annual gross research journal income. for 2017 this gives a minimum reserve level of £1.04m and a maximum of £1.44m. At 31 December 2016, the Society’s reserves amounted to £1.44m, which is the prescribed maximum. The board has accepted that we should spend down some of our reserves and will consider opportunities for spending on worthwhile projects that further the society’s objectives.

One of the society’s new initiatives, that I have been taking the lead in, is the master’s degree scholarships of up to £10,000 to help raise visibility and encourage UK students to consider qualifications that lead to a career in OR. A judging panel has just reviewed all the applications and offers have been sent to the two successful applicants – congratulations to both. You will hear more from the candidates, who will become ambassadors for The OR Society, in the October issue of Inside OR. I will shortly be reviewing the process with the board to look for future support. If you have any comments or feedback, then please email me.

This has been a very busy year for the society and, as well as thanking all the volunteers, who gave us 5,000 days of their time, I would like to thank the Secretary and General Manager, Gavin Blackett, all his staff and, in particular, Strategic Projects Manager Louise Allison who is due to start maternity leave this month. Louise has been extremely helpful in the implementation of the pilot scheme for the Master’s Degree Scholarships – good luck Louise. Looking forward, we have many important decisions to make regarding our publishers, the launch of a redesigned website and other objectives. As always, do get in touch if you require funding for a project that helps us achieve any of our goals – namely reach, visibility, engagement, the people pipeline and the strength of UK OR research. 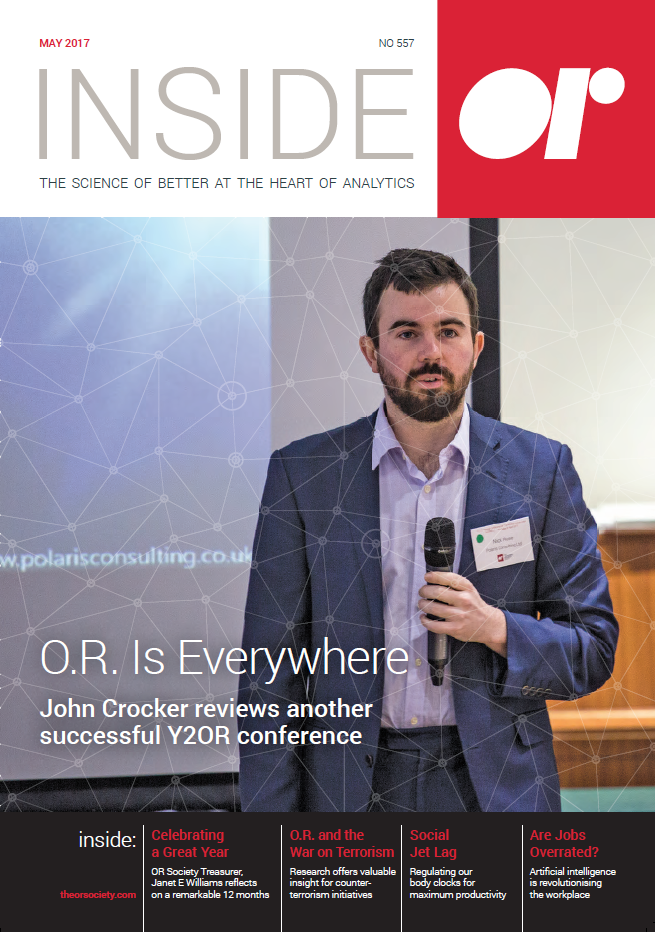 OR Is Everywhere; Celebrating a Great Year; OR and the War on Terrorism; Social Jet Lag; Are Jobs Overrated?