This month, we examine how scientists have trained a computer to recognise beautiful scenery using 'deep learning'; John Hopes and Alistair Morley further our Brexit discussion; Louise Maynard-Atem brings the answers to her recent brain teasers.

Does it really matter?

It is good to be back in Inside OR, though this time as President Elect (PE) rather than Vice President. In case you are wondering what the PE actually does, apart from following Ruth around taking lots of notes, the formal responsibility is to chair the President Elect’s / Past President’s Committee which awards the Beale Medal and Companion of OR. This is my seventh year on this committee now and I never cease to be impressed by what a distinguished community of award winners we have built up over the years. This is an important pillar of strength for the society.

Beyond the formal committee role and being a general director, trustee and officer of the society the PE is principally preparing for office, meeting people, attending various committee meetings, being a sounding board for the president and starting to develop a strategic perspective on OR and the society. Looking ahead to my presidential term, it is already clear that this is going to be a time of rapid and major change. Apart from anything else I am highly likely to be president at the time of Brexit, a topic I spoke about at Young to OR, covering the potential impact generally as well as specifically for OR, and won’t repeat that here. I will reiterate, though, that Brexit is a big issue for the UK, a much smaller one for the EU and almost nonexistent for the rest of the world.

There is a real danger, therefore, that it will distract those of us in the UK from some much more important issues, including those relating to climate change, geo-demographics, the need to increase productivity and the impact of new technology. On the last of these we have seen wave after wave of innovation in recent years. First, we had analytics and the advent of Big Data, which have been covered at length in these pages. Then it was digital disruption, with the much-cited examples of Uber, Deliveroo and Airbnb. These generally involved use of mobile communications to connect consumers with suppliers thus transforming traditional service businesses. Spatial analytics has played a big part in these disruptions but they also often involved an element of OR in optimising the scheduling of supplier to customer.

The latest trend, though, which is gathering pace in the service sector in particular is the new wave of automation. For example, processes that were offshored ten years ago in order to reduce cost are now being automated to make them cheaper still; so that whereas before you would talk to someone in a call centre in Bangalore, now you talk to a robot in that same call centre. The new technologies include natural language generation (NLG), robotic process automation (RPA) and artificial intelligence (AI), with the latter being used to automate the human judgement element of business processes. For those of us who dabbled in AI back in the late 80s and early 90s with expert systems, neural networks and genetic algorithms it is somewhat amusing to see AI being repackaged as the latest thing. But the difference is the availability of vast volumes of data that enable us to train algorithms more effectively than ever before.

This new wave of disruption from automation threatens to have a massive impact on jobs in the service sector and, for this reason, it is attracting much more attention from senior management. Whereas “better insight” from analytics is undoubtedly a business benefit􀀎 CEOs and C􀀨Os can much more easily relate to technology that cuts headcount. This provides a clear return on investment that is easy to support, and the danger is that organisations now swing to a focus on
cost reduction to the exclusion of all other potential benefits from technology.

But what does this latest wave of digital disruption mean for OR? First, if OR responds appropriately, it could play a key role in what is becoming a massive skills shortage. Goldman Sachs has announced that in future it will need far fewer bankers and far more data scientists. Similarly, data scientists will be replacing lawyers in the law firms and accountants in the accountancy firms. So where will all these data scientists come from? Generally the problem is posed in terms of a need for more people with STEM skills, but within that community
OR-qualified people are almost uniquely well placed to meet the need, having that ideal combination of mathematical / statistical and IT / coding skills together with an ability to apply these skills in a management context (provided, of course, that this is what they have been taught on OR courses). This combination is what is often referred to as the unicorn competency as it is extremely rare and may, in fact, not exist at all. It is worth reminding ourselves, though, that while there may not be an “I” in Team, there is undoubtedly an “OR” in Unicorn.

If, in a post-Brexit world, we could generate thousands more OR-qualified entrants to the workforce, it seems there would be no shortage for demand for them.

One of the challenges I often receive is that while it is all very well to place OR people into data science roles involving statistics, machine learning and data visualisation, what about real OR? Well, as with the Uber-type disruptions there is often “OR inside” the automation technologies providing the optimisation. In addition, there is a key role for OR in optimising the processes to be automated and in achieving the best balance between automation and human involvement in the
new processes. Finally there is a need for the kind of strategic modelling that OR excels at to determine the best operating
model for the organisation going forward, with a workforce that combines onshore, nearshore and offshore workers with robots and transitory staff from the “gig economy”. Also, at the government level, this type of modelling will be required to support policy responses to the large scale reduction in jobs.

I realise that I might be accused of being optimistic in placing
OR at the heart of this latest wave of disruptive innovation, but I did say I had only just started developing my strategic perspectives. There will be more to come over what promises to be an exciting couple of years. 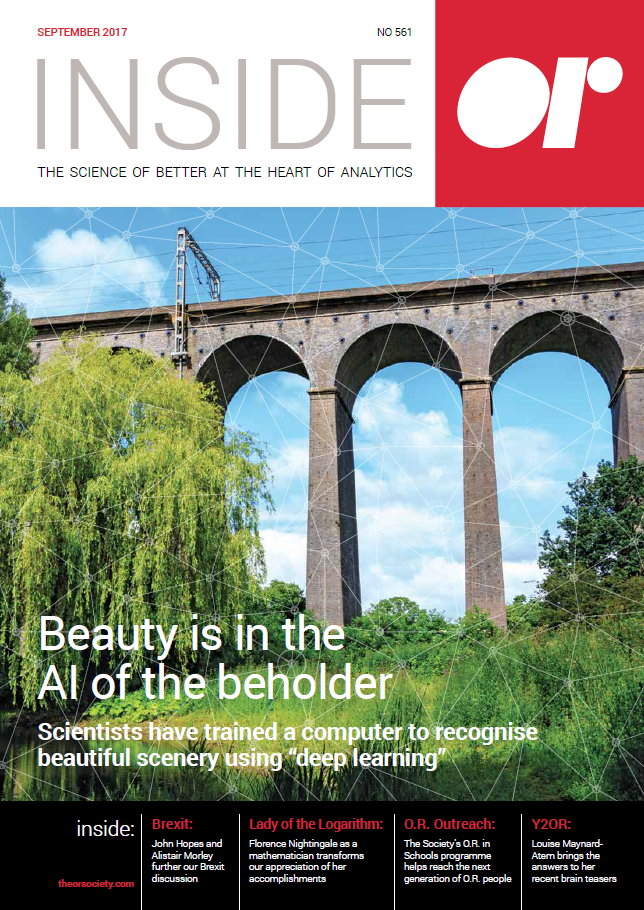 Beauty is in the AI of the beholder; Brexit; Lady of the Logarithm; OR Outreach; Y2OR.