This month, we share look at the two candidates up for election for society president; Anna Nagurny speaks about the transformative power of operational research; and Annunziata Esposito-Amideo.

OR60, our Diamond Anniversary conference, was launched with a plenary from Professor Anna Nagurney, who is the John F Smith Memorial Professor in the Department of Operations and Information Management in the Isenberg School of Management at the University of Massachusetts Amherst.

Professor Nagurney is also the Founding Director of the Virtual Center for Super Networks and the Super Networks Laboratory for Computation and Visualization at UMass Amherst and an affiliated faculty member of the Department of Civil and Environmental Engineering and the Department of Mechanical and Industrial Engineering at UMass Amherst. She devotes her career to education and research that combines operational research (OR)/management science, engineering and economics.

Professor Nagurney spoke of how OR was first used in the late 1930s to describe the process of evaluation of radar as an essential tool in the air defence of Great Britain. She also described how Lord Patrick Blackett was one of the four founders of the OR Club in 1948, which became The Operational Research Society in 1953, and how Blackett had been the director of naval operational research at the admiralty and a recipient of the Nobel Prize in physics in 1948.

OR, from its initial focus on military problems, had expanded, she said, to include powerful, essential tools that transform for-profit businesses, non-profit organisations and governments, as well as our daily lives.

Concerning the role of OR in the UK, Professor Nagurney related that the first OR journal, Operational Research Quarterly, was published in Britain during 1950 and then became the Journal of the Operational Research Society (JORS) in 1978. She also said that the first dedicated chair in OR was established at Lancaster University in 1964, the same year as its founding.
She quoted Philip M Morse in his 1977 book, In at the Beginnings: ‘The delights of research in OR are multiple. To me the pleasure coming from understanding how traffic behaves is as great as that coming from understanding oxygen atoms combine to form O2 in addition the practical applications of OR theory are often immediate and satisfying.’ Morse, she said, ended his book with the following statement: ‘For those who like exploration, immersion in scientific research is not unsocial, is not dehumanising; in fact, it is a lot of fun. And, in the end, if one is willing to grasp the opportunities, it can enable one to contribute something to human welfare’.

OR had come a long way since its beginnings and Professor Nagurney believed that the founders of OR would be delighted to see the growth of ‘our discipline and profession with the discovery of and wide use of novel methodologies and innovative applications that they could not have envisioned in: industry, government defence, healthcare, consultancies, and even, increasingly, in non-profit organisations’.

Regarding her own journey in the world of OR, Professor Nagurney said: ‘From my first university course on the subject to my first projects in industry – working in the high tech defence sector on naval submarines in Newport, Rhode Island, I was drawn to the power of the subject, especially when combined with computing’. She also said that students were increasingly drawn to OR because of its scope and great job opportunities.

During her plenary, the professor also had time to talk about her belief that OR could contribute much to the new era of super networks and, in particular, it could provide a means of viewing supply chains as networks. Her career focus, she said, concerned the applied and theoretical aspects of network systems, particularly in the areas of transportation, logistics, critical infrastructure, and finance.

Operationally, the multidisciplinary aspect of OR could be useful in situations where alteration to road networks to improve traffic flow actually had the reverse effect and impeded traffic through it. This could be exemplified by application of Braess Paradox. The paradox was postulated in 1968 by German mathematician Dietrich Braess, who noticed that adding a road to a congested road traffic network could increase overall journey time, and it has been used to explain instances of improved traffic flow when existing major roads are closed.

Braess paradox could be applied in OR as a tool for many situations. Professor Nagurney noted how OR practitioners had used Braess paradox in 1969 to reduce traffic congestion in Stuttgart, Germany. The solution to the problem of congestion was to close down a newly built road and, paradoxically, this resulted in a reduction of congestion.

Citing another example, she related how, in 1990 on Earth Day, New York City cured its congestion problem by closing down 42nd street. Then in 2002, in Seoul, Korea – a six lane road built over the Cheonggyecheon River that carried 160,000 cars per day was perpetually jammed. Scientists asked how congestion be eased. The answer lay in Braess paradox – the road was torn down and congestion, overall, eased.

The multidisciplinary perspective of OR using tools to solve problems from many different toolboxes, lent itself well to dealing with perishable and time sensitive supply chains too. She spoke of how it had been used by the Red Cross to optimise transport and application of perishable blood supplies, of how useful OR was in ensuring reliable supply chains involving medical nuclear supplies, how its game theory tools could be applied to supply chains, and how it could assist with the supply of electric power, or perishable foodstuffs that fed the world.

The Future
In conclusion, Professor Nagurney said she wanted to offer her vision of where OR could go, this plenary being presented at OR60 in 2018, and she imagined that forty years on, delegates would travel to Lancaster University ‘via a hyperloop and/or autonomous vehicles, among other means’ because ‘face to face time will still be essential for scientific exchanges’. Current students and postdocs at the OR60 conference would ‘be the audience,’ 40 years on, but as ‘senior statesmen and stateswomen and they will look forward to another half century of contributions to OR due to health and medical advances’.

Additionally, advanced computing not even conceivable today will be pervasive, but with a human touch and ‘OR will be a household name because of its sustained and significant impact’. 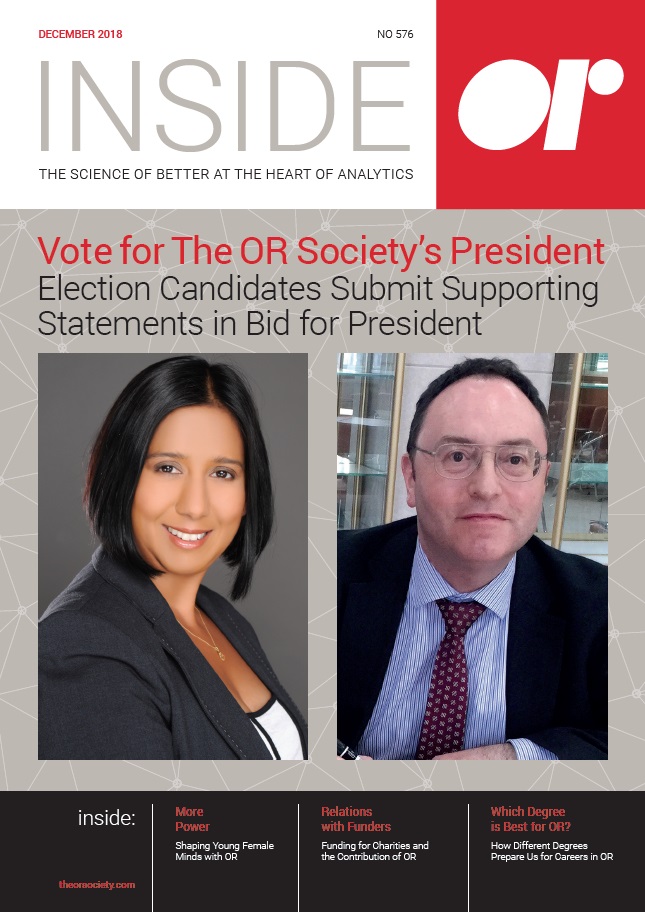