In this edition, our diversity champion Sayara Beg tells us how we fared in our first diversity and inclusion benchmarking exercise; the Certified Analytics Professional accreditation makes a move to the UK; we dig deeper into Towards a Science of the Web; and a case study presented at OR59 delves into the efficiency of the Spanish airport system.

What is a Diversity and Inclusion Framework?

SAYARA BEG, FORS, DIVERSITY CHAMPION FOR THE OR SOCIETY

On 5 June 2015, The OR Society signed the Science Council’s Declaration on Diversity, Equality and Inclusion (DEI), publicly committing to creating a diverse pool of operational research talent and skills. The Declaration aims to bring together professional bodies from across science to work towards increased diversity and inclusion within the profession. It centres on a
collaborative approach, encouraging shared learning and expertise.

I was appointed as the Diversity Champion to work with the board, the general council, the committees and its members to help embed diversity in the delivery of the strategic aims and objectives. In the absence of a Diversity Champion terms of reference or a job description, I looked to Science Council (SC) for advice.

The role is limited to one person to provide assistance, but one person cannot be as diverse and inclusive as a group of individuals in a committee. The role of a Diversity Champion can be embraced by anyone, not necessarily a minority ethnic person.

According to the Science Council: [The Diversity] Champion is not expected to be a bastion of knowledge on diversity law nor to operationally manage any diversity actions, but rather to act as a figurehead in promoting and driving DEI work forwards. Theirs is a strategic and tactical role of identifying where the organisation can be more inclusive and supporting the implementation work of the executive team.

During August and September 2016, the ORS was invited to pilot a new Diversity and Inclusion Framework that was being drafted in a collaboration between the Royal Academy of Engineering (RAE) and the SC with the aim of helping professional bodies in science and engineering to track and plan progress on diversity and inclusion. As part of the pilot, participants provided feedback across key areas such as the ease, clarity, intuitive and gaps, as well as make suggestions for improvements.

The framework was officially launched in September 2017. Member institutions were asked to complete the framework and commit to its outcome, which we did with input from the society’s general council and board members. The Diversity and Inclusion Framework asks its member participants to assess its position across areas that not only support safe, positive and untiring environments, but also behaviours and cultures that infuse a sense of respect, value and belonging, and encourages participants to consider actions and initiatives that could improve the status quo. The Society formally submitted its assessment and in return we received a report detailing where the society was positioned compared to the benchmarked position.

So how did The OR Society fare in its first ever collective assessment of its position on diversity and inclusion? Quite well, as it happens. We are a diverse and inclusive learned society. In some areas we fared much better than other members of the SC. However, there is so much more we can do for our members as a professional body. The board acknowledged this and committed to embedding diversity in its long-term strategy and business plan. The society and its members can look forward to a bigger and brighter future, as it joins other learned societies who are leading the way for diversity and inclusion. 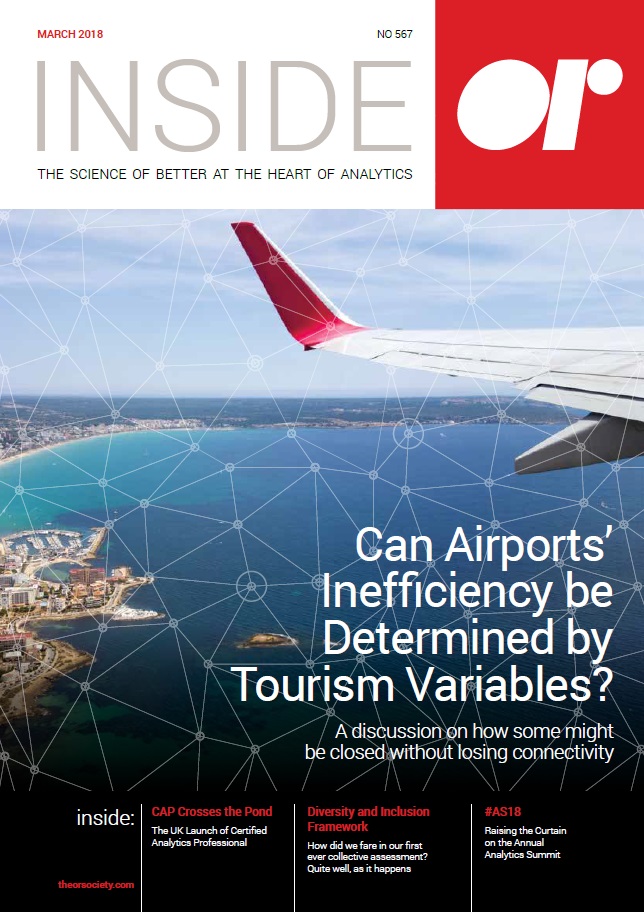 Can Airports' Inefficiency be Determined by Tourism Variables?; CAP crosses the pond; Diversity and inclusion framework; #AS18.