This month, we share highlights from our diamond jubilee OR60 conference; Ian Mitchell discusses connecting our regional groups with webinars; and Callum Staff discusses the question of Open Source Versus Proprietary software.

It is rare to have a once-in-a-lifetime experience, but I had one at OR60. I don’t mean the ceilidh (which we also had at Edinburgh) or the delightful cruise on Windermere (which I have experienced before many years ago). No, I mean delivering a presidential address, which I can confirm from experience is quite different to being a more general plenary speaker, mainly because it comes with a set of expectations based on 60 years of tradition and precedent.

I have been asked by the editor to summarise my address here, which involves boiling it down from six pages to two. But I suppose if I leave out all the jokes, the anecdotes, anything I have written about before in these pages, and any deviation from the main argument, then I might just make it. Here goes.

I began by following the advice of Maurice Kendall, who was president at the time of OR1 – if it had been called that then – that ‘the presidential address should be the occasion not merely for discussing our subject and our affairs among ourselves, but for considering themselves in relation to the world in which they are immersed’. This meant starting with wider issues, including the productivity puzzle, which is the major economic challenge facing the UK as since the financial crisis productivity has stubbornly refused to return to its growth path, and there has been much debate as to why. What we do know for sure, though, is that operational research (OR) has historically played an important role in delivering productivity improvements and has a strong claim to be part of the future solution.

In its Industrial Strategy, the government identifies big data and AI as a grand challenge that could help solve the productivity puzzle while also strengthening UK competitiveness. It also highlights the urgent need to address the STEM skills shortage, with 40% of employers reporting that this is their biggest recruitment challenge. In addition, the Bond Review and the government report on Computational Modelling: Technological Futures, which we have covered in Inside OR before, have argued for the particular importance of the mathematical sciences and computational modelling in contributing to innovation and hence to productivity growth. All this is very promising for OR, provided that OR is fully recognised as being (as it is) at the heart of mathematical sciences and modelling. Indeed, when I talked this through with Ed Humpherson, Head of the UK Statistics Authority (who was attending the conference), his view was that ‘OR’s time has come’.

Moving on to technology-driven change, we have experienced many waves of innovation recently and OR weaves its way through all of them. The latest is AI, which is often used as a shorthand for a range of technologies that are bringing automation to parts of the economy that have previously been untouched. AI is, of course, at least as old as OR and has been in and out of fashion several times. Indeed, John Ranyard referred to the opportunity afforded to OR by expert systems in his presidential address in 1988. But now we have vast volumes of data that enable us to train algorithms better than ever before, and recent breakthroughs for AI have come very fast: it was only in 2011 that IBM Watson had its famous Jeopardy win, and Google has moved from doing very little as recently as 2012 to a portfolio of many thousands of projects today. In addition, 2017 research showed that only 20% of companies had yet incorporated AI in their business, so we are still at the very beginning of the so-called fourth industrial revolution.

With all this innovation new disciplines are emerging, such as analytics, data science and AI that overlap, not only with one-another, but also with established disciplines such as OR, statistics and computer science. And this inevitably raises the question about whether OR (and The OR Society) should be changing its name. Perhaps the society should do as its Irish counterpart did and change its name to the Analytics Society?

It is worthy of debate, but we have been here before. The 1990s was a boom time for management consulting, not only because many consulting firms grew tenfold during that decade, but also as reflected through the boom in three letter acronyms: ERP, ABC, CRM, BPR, EVA, Y2K...and once again the concern was that these new areas of activity overlapped with established disciplines such as OR. As a result, The OR Society could easily have become the BPR Society. But we stuck with our brand, and despite this OR is still thriving today. The diversity of The OR Society’s research journals, events, training and other activities reflects 60 years of expansion and development. More research than ever is being published in journals and presented at conferences. The UK Government OR Service (GORS) has doubled in size over ten years to 700 analysts today, and the Heads of OR and Analytics Forum (HORAF) is expanding.

The main weakness of OR, as reflected in many past presidential addresses, is lack of visibility. The term OR means nothing to most people, and especially worryingly means nothing to most decision makers who could benefit from it. Given the current risk of OR being crowded out by the emerging disciplines of analytics and data science, addressing this weakness is a top priority for The OR Society.

In addition, there are specific challenges for OR and The OR Society that were expanded on in my address: to have a place at the table in following up the Industrial Strategy, the Bond Review and the Computational Modelling: Technological Futures report; to collaborate more with related disciplines (and Societies); to keep OR in the vanguard of research and innovation flowing from technology-driven change; to continue to differentiate OR through the techniques it has brought to the world over the past 60+ years (such as simulation and optimisation); to build on the successes that the OR Society has had with analytics; to demonstrate the value of the OR approach in the world of AI and big data; and to play a full part in meeting the skills needs of the 21st century.

If we can rise to these challenges OR can be at the heart of the response to the productivity puzzle in a world of technology-driven change. 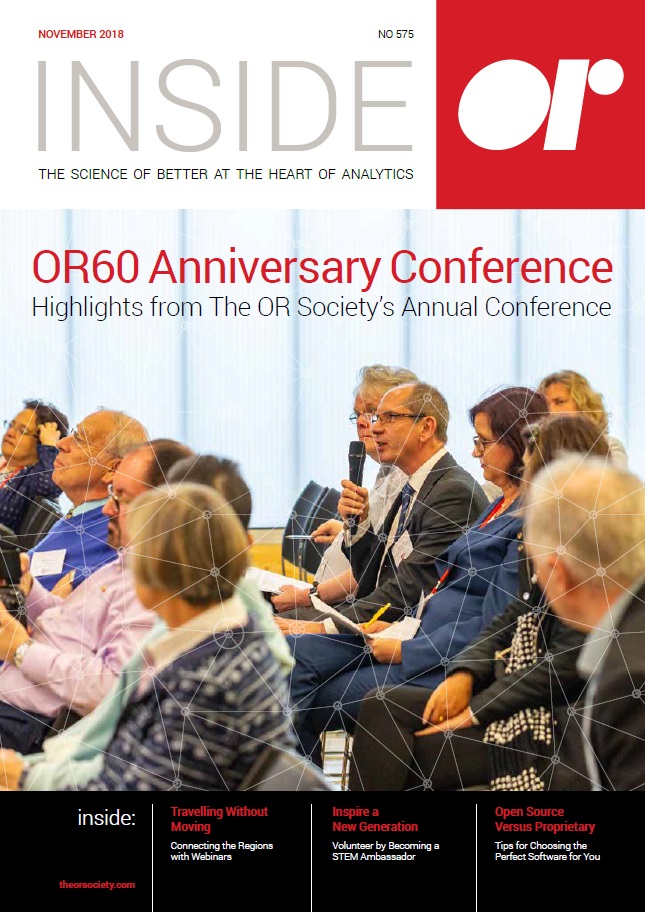