In this edition, John Hopes reflects on The OR Society’s 2017 performance; we gain an overview of some of the best sessions to attend at our OR60 annual conference; Edmund Burke is interviewed about his new position of Deputy Vice-Chancellor of the University of Leicester; and we share an in-depth discussion on challenges of social media data.

The OR Society’s 2017 Financial Review

JANET WILLIAMS, TREASURER, THE OR SOCIETY

One of my duties as your treasurer is to write a lead article for Inside OR; those with a good memory for detail may note that this article has traditionally been provided for the May issue but this is its new allocated slot. As the statutory accounts for The OR Society were agreed at the AGM held at Cardiff in June and have since been submitted to Companies House, it makes sense that I update those of you who could not attend the AGM on our finances at this time.

First, what a year it’s been politically with Mr Trump and Brexit continually in the news, and the future of life after Brexit in the UK (delayed in/out or another referendum?) is still uncertain. So it is pleasing to report that during this period of uncertainty the total net assets of the society increased slightly to £2.605m over the year (2017), with the deficit on income and expenditure being overturned by investment income and a net £123k capital gain (realised and unrealised) on our investment funds.

An important event this year has been the move to our new publishers, Taylor & Francis; this contract provides a guaranteed income paid upfront in each of the next five years. Thus during the year the Board reviewed and revised the society’s reserves policy.

In setting its reserve policy, the board distinguished between the funds held in the general fund, which arise from the normal operating activities of the society, and the reserve fund held to ensure that the society can continue long-term operations in the event of financial risks materialising. The policy review established revised minimum and maximum levels for the amount required in the reserve fund. The existing policy based its suggested levels on the income generated by its publications income. This approach reflected the critical dependence of the society on its journal income, but did not fully recognise that as income grew or decreased then reserves would also move up and down. This policy would mean that the benefits of a growing income would not be fully felt and that a reduction in income would cause a release of reserves which could cause disruption the following year if income then grew again. It was agreed that a steadier approach to reserves was needed and that it should be based on the costs of running the society rather than the income.

Based on the annual fixed costs of running the society, one year’s costs of £760k should be a minimum value for the reserves, and the maximum value would then be two years’ costs giving a value of £1.52 million. This would cover any growth of the society over the next few years and release funds to further the society’s aims. On 31 December 2017, the society’s reserves – its investments and cash held within the reserve fund – amounted to £1.6m. The reserves are therefore just above their prescribed maximum.

The society’s income and expenditure account (general fund) showed a deficit of nearly £144k during the year, on a turnover of just over £1.1m. This compares with a surplus of £84k in 2016. The Board had budgeted for a deficit of up to £200k, as the high level of reserves made it possible to invest in strategic objectives. As well as investing in strategies, some of which are described below, there were three main reasons for the deficit: an increase in salary spend following a Board decision to employ additional staff for sickness cover and to meet strategic aims, together with lower than budgeted income from sales of publications and from conferences, offset by a payment from the new publishers to support the cost of transfer.

It was disappointing that the publications income was £152k below the 2016 level, largely as a result of changes in our previous publisher’s, Palgrave, income allocation approach. Our Secretary and General Manager is querying this with Palgrave. This was offset to a large degree by an initial payment of £100k from our new publishers, Taylor & Francis, to cover transition costs, giving an overall decline in publications income from 2016 of £52k. It is anticipated that in 2018 publications income will rebound under the new publishing contract.

The conference income, which was £37k below the 2016 level, reflects disappointing attendance at our Young to OR and OR59 events. The society is making every effort to turn this around in 2018 and for OR60 is investing in subsidising our journal editors to enable them to attend the conference to network with the delegates and our new publishers. The chair for OR60 is Graham Rand and we are confident that it will be a success under his leadership.

Most operations to support the charitable aims of the society – such as conferences, special events, regional societies, special interest groups, education, publicity and outreach initiatives, the monthly Inside OR magazine and special charitable projects – result in deficits to the society. To support them, the society relies primarily on subscriptions and income from its academic journals, particularly the latter which in 2017 contributed over £630k net of all associated costs.

So given the above finances we are still in a strong position with our reserves and the Board has budgeted for a further deficit of £200k-£250k this year. This will of course be reviewed annually, the aim being for our reserves to lie within our prescribed minimum and maximum values described above. Future strategic spending is described in our annual report and includes the development of our new website which is scheduled to be launched later this year and an OR exhibition project led by Sanja Petrovic with Science Projects Ltd (a non-profit organisation based in London) due to be completed by the end of the year. Our first year of Master’s Degree Scholarship students – Scott McDougall at Strathclyde University and Tomos Power at Cardiff University – will be completing their studies in September. It is pleasing that both students have enjoyed their studies and were useful ambassadors for the society; we wish them well for their future in OR and hope they will remain active members. This year we have allocated three scholarships and will be looking into the possibility of extending the pilot scheme.

Finally, the board compiled a lengthy list of strategy options which we could fund in future but we are always pleased to hear from our members and encourage you to get in touch if you require funding that will help us achieve any of our goals which remain as reach, visibility, engagement, the people pipeline and the strength of UK OR research. 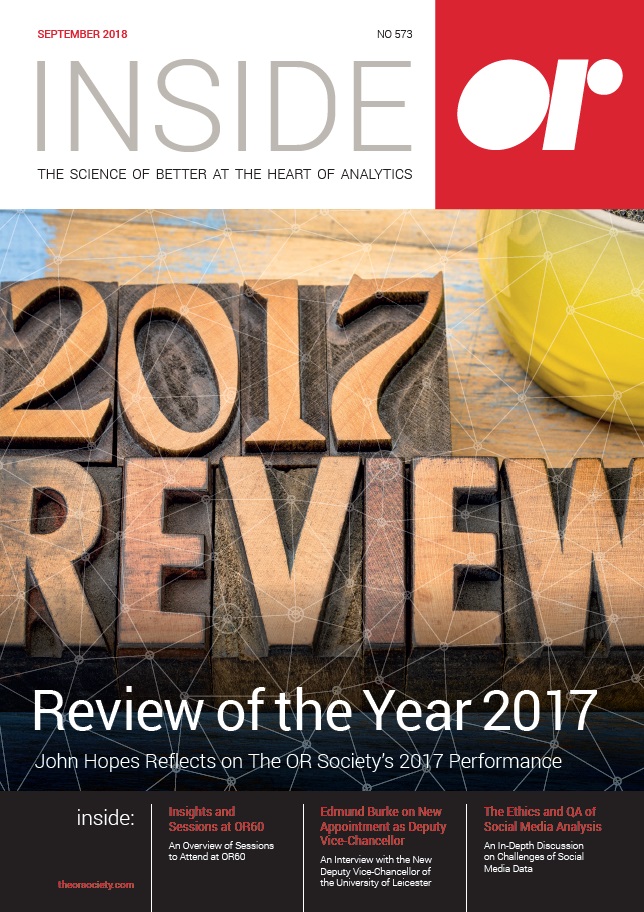